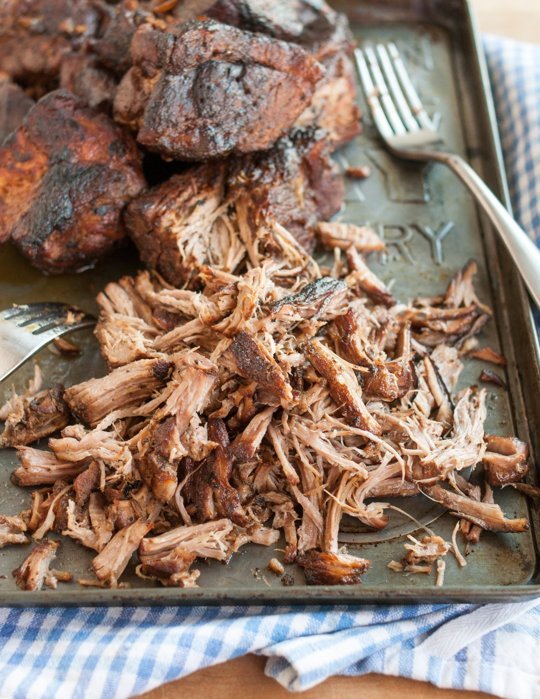 — adapted from the kitchen 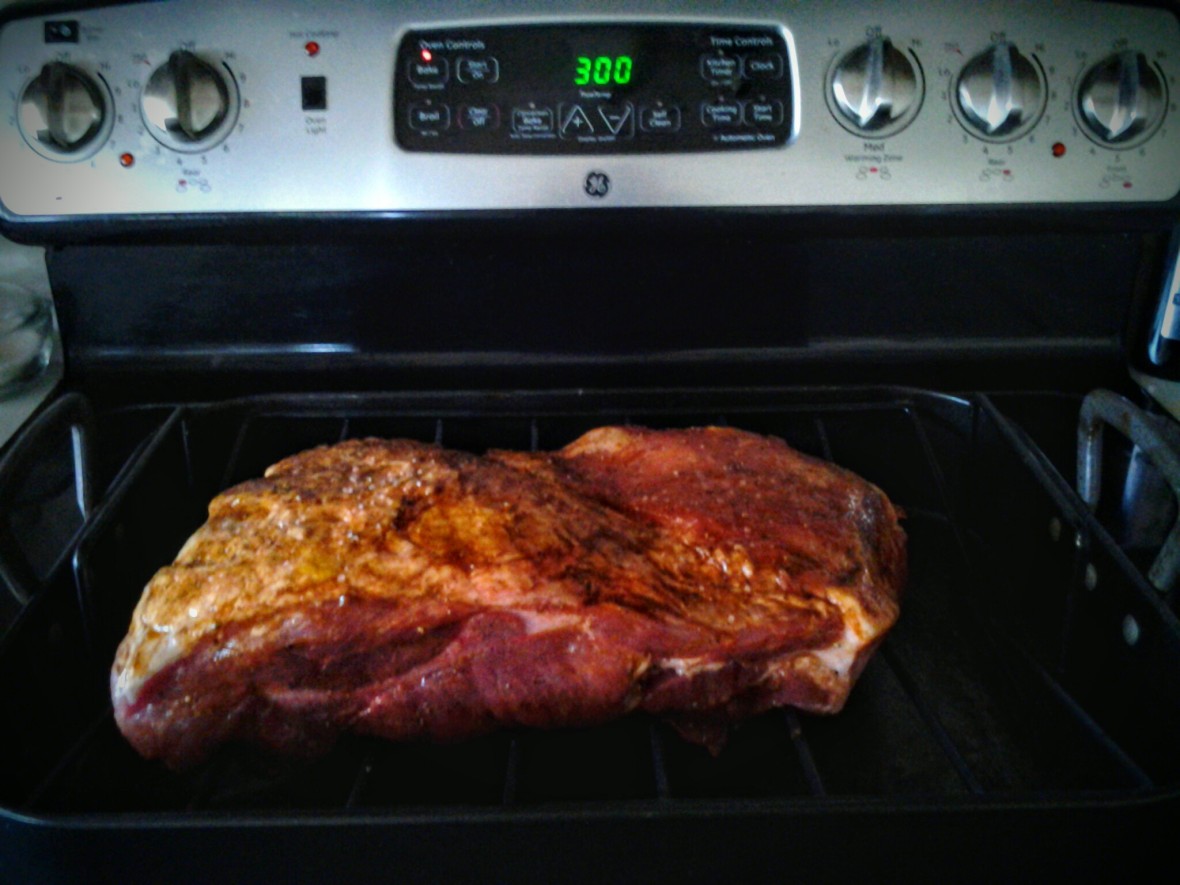 I do mine whole w/dry rub, dash liquid smoke, other personal preferences and usually apple juice, organic apple cider, etc.. Didn’t have any this time. No veggies with mine but yes on a little vegetable stock; using Better Than Bouillon vegetable base. And I had peaches?

Scary…let’s see how that works!…. simple, low and slow for today 😉
*NOTE at bottom of page 😀
➻
I shared the kitchen because there’s good information and ideas.
However, mine ➳ whole, longer, flavor, less liquid.

Cooking a pork shoulder into heavenly succulence is practically fool-proof, but it does require time. The shoulder is a hard-working muscle and the meat is pretty darn tough. At a low, steady temperature, however the gelatin in that tough shoulder melts and bastes the meat as it cooks. You can’t rush it.
Put the meat in a Dutch oven or other heavy pot, pour in just enough liquid (broth, beer, or anything else) so that the meat is partially-submerged, then cover it and let the pork cook slowly in a low oven for a few hours. This is entirely hands-off time. The porrk is done when it’s so tender that it literally flakes apart when you poke it with a fork and falls off the bone.

What to Do with Pork Shoulder

I said this was my secret weapon and I meant it. A few hours of labor upfront means some pretty darn incredible pork that will make almost any quick weeknight dish taste like it took hours to make.Depending on how you spice the pork, one single batch can be used in countless ways. Besides making straight-up pulled pork sandwiches, I add it to pasta sauces and frittatas, casseroles and pizzas. Don’t forget about making tacos or enchiladas, steamed pork buns or stir-fried rice — almost every cuisine has its own uses for shredded pork! I also freeze the pork in 1-cup batches so that I can easily thaw it for easy dinners down the road.
I’ve listed a few other ideas below and some different spice blends at the end of the recipe.

Heat the oven to 325°F.
Place an oven rack in the lower-middle of the oven.Trim the pork: Trim off any large pieces of fat from the outside, but leave small pieces and the interior fat. If using boneless pork, cut the pork into several large fist-sized pieces. If using bone-in, leave the pork as is, on the bone.

Season the pork:
Sprinkle the pork with salt, pepper, and spices. Rub the seasoning into the pork with your fingers so that the meat is evenly coated on all sides.Sear the pork (optional).
Add the vegetables (if using):Onions, garlic, and other vegetables also deepen the final flavor of the pork, but are optional. If using, nestle them around the pork in the Dutch oven.
Add the liquid:
Pour the liquid and liquid smoke (if using) over the top of the pork. The pork should be only partially submerged, with some of the pork remaining above the surface of the liquid.
Bring to a simmer:
Set the Dutch oven with the pork over medium-high heat and bring the liquid to a simmer.
Cover and transfer to the oven:Once simmering, cover the Dutch oven and transfer the whole pot to the oven.
Cook for 2 to 4 hours, until fork tender: Let the pork cook undisturbed for 2 hours, then begin checking it every half hour. Total cooking time will be 2 to 4 hours depending on the amount of pork and whether it’s bone-in (which takes longer to cook). The pork is done when it is fork-tender: when the meat can be easily pierced with a fork without resistance and easily falls apart with a little pressure. If you’re cooking pork on the bone, the meat should be falling off the bone. If in doubt, cook the meat another half hour; it’s almost impossible to overcook meat with this method.
Transfer the pork to a large bowl:
Lift the pieces of pork out of the liquid and transfer to a large mixing bowl.
When cool enough to handle, use two forks or your fingers to shred the meat into pieces. Remove any large pieces of fat or bones.
Strain the cooking liquid:
Strain the cooking liquid into a measuring cup. The vegetables can be chopped and mixed in with the pork, if desired. Skim the fat off the top of the cooking liquid.Moisten the pork with cooking liquid or barbecue sauce (optional):
For more moist and flavorful pulled pork, you can mix some of the cooking liquid back into the pork. Start with a little, mix, then add more until the pork is as wet or dry as you like. Alternatively, for barbecue pulled pork, you can mix in barbecue sauce.
Serve or freeze the pork:
Pulled pork will keep for 1 week in the refrigerator or for up to 3 months in the freezer. 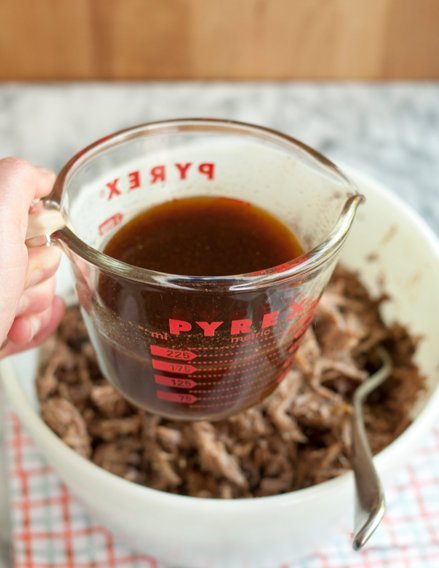 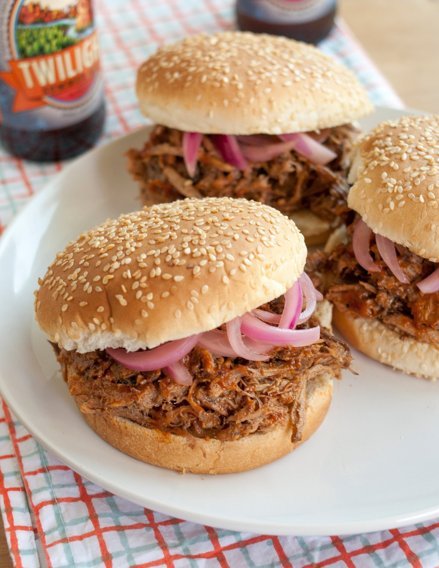 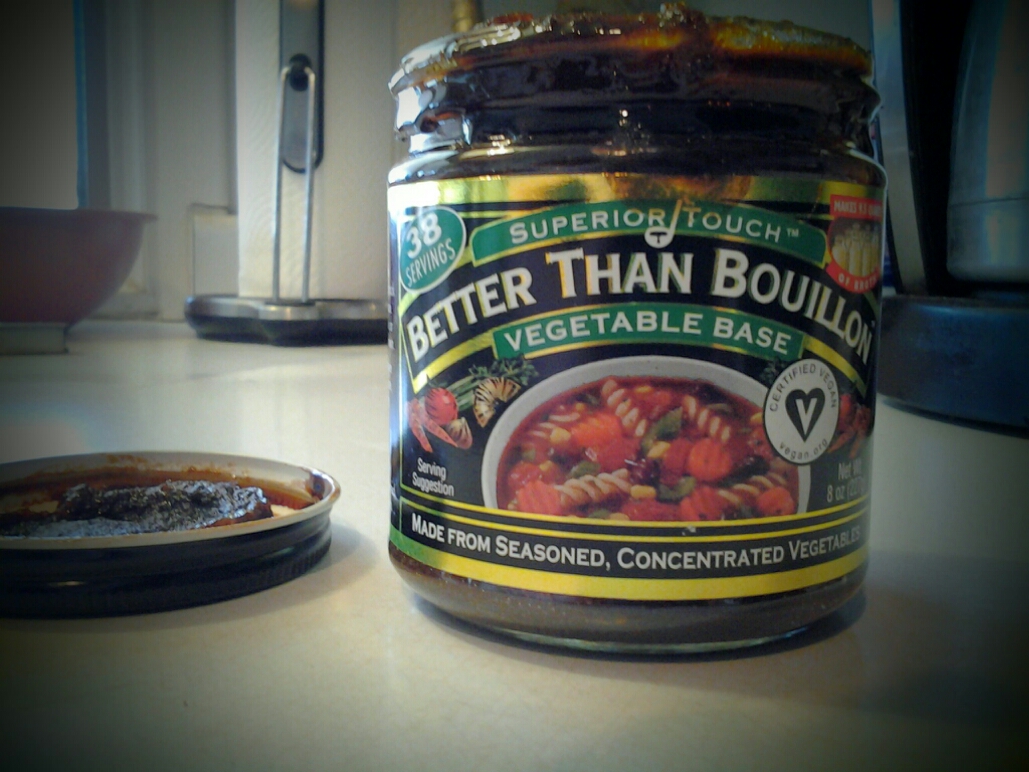 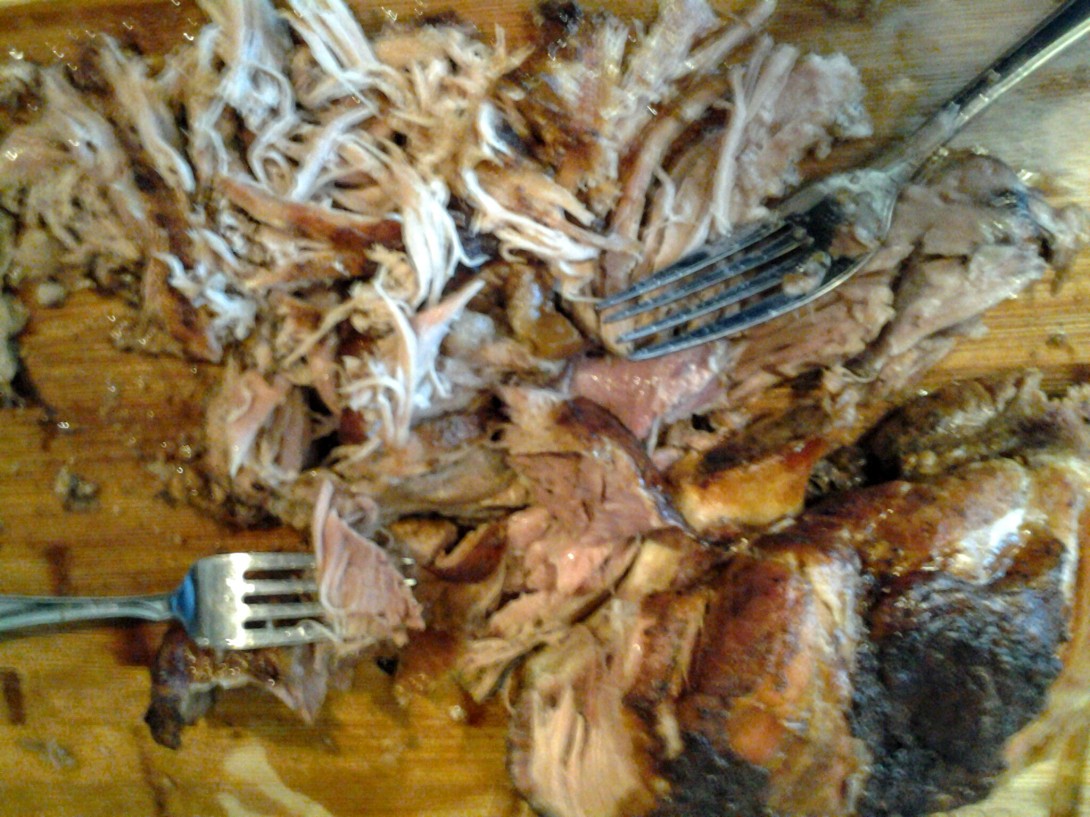 *TURNED OUT DELICIOUS!
with peaches! 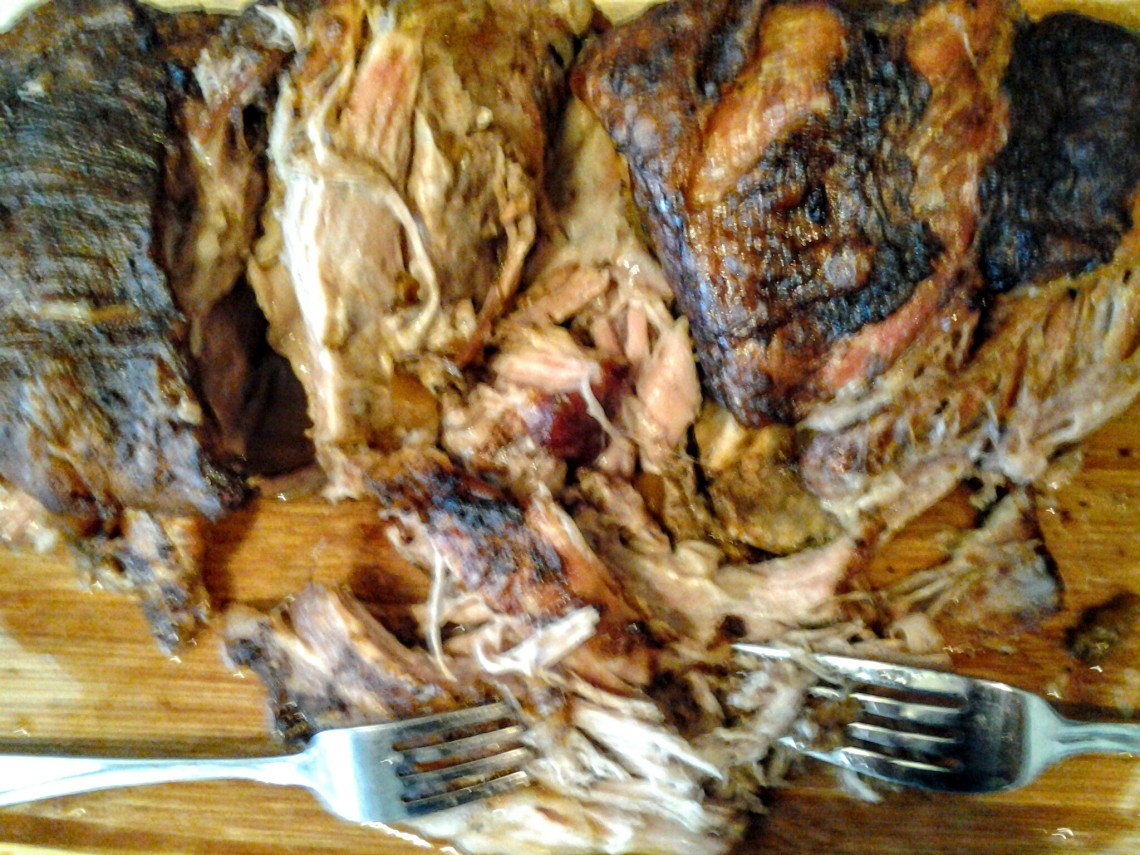 Next: I found good recipes to use some of this pork the rest of the week @theHuffingtonPost YUMM!