How to Make the Best Potato Salad

Because…well, because it’s just happens to be the same way I make mine, my mother made hers, my grandmother…and now my daughter.
*We have been known to toss some thinly sliced radishes in. Truthfully, it depends on what I get from my local Farmer’s Market. And of course…this is for “basic measurements”. Otherwise, it’s a matter of preferences, what vegetables you have – must haves are the potatoes and eggs – then options like celery, radishes, onions, scallions, even olives (?), bell peppers, 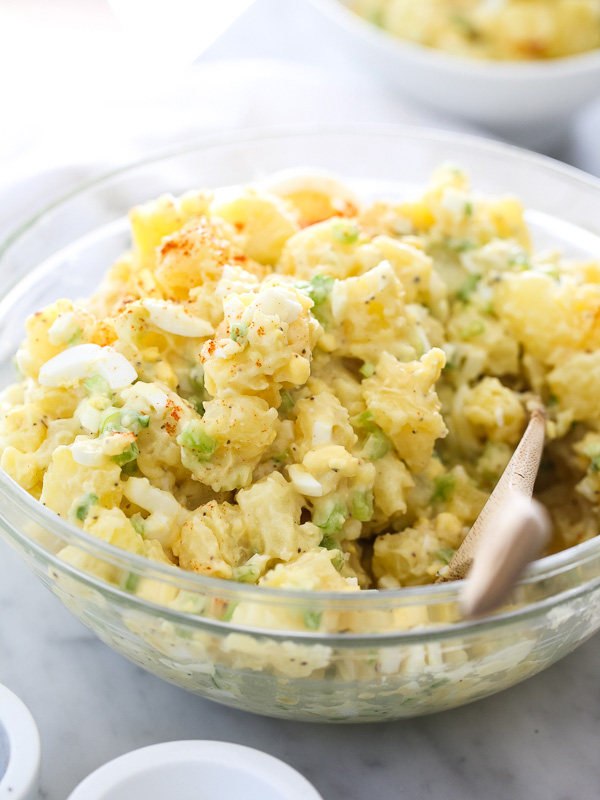 How to Make the Best Potato Salad

This isn’t my first potato salad recipe rodeo on this bloggity blog, but it’s for sure my favorite and dare I say, the best.
Okay, that might be a pretty bold statement, stating this potato salad as the best. I’ve shared several variations of potato salad here including the more complicated, throw everything in but the kitchen sink Stetson Chunky Potato Salad  to my Roasted Potato Salad with Bacon Dressing  to my Loaded Baked Potato Salad that has definitely risen in the ranks of favorites.
But I’ve yet to share the number one potato salad that worms its way into nearly every BBQ, picnic or just good old fashioned supper at my house, the one I’m proud as punch to share when I go to other’s homes as well.

This classic potato salad is the one I grew up on. It’s the recipe my Grandma made, then passed onto my mom who made it to accompany every hamburger, grilled ribs or other summer deliciousness, and who then passed it onto me and now my daughters. It’s the recipe I often spend making alongside my amazing daughters. In fact, I’ve made it so many times I don’t even need the recipe. You know a recipe is that good when you know it by heart.

So, here’s how to make the best potato salad ever. Let’s get started…

How to Make the Best Potato Salad
About the recipe:

We use white potatoes, or Yukon Golds, in our family potato salad.

Always add the potatoes to cold water and then bringing them to a boil. Like pasta, adding salt to the water, 1 to 1 ½ tablespoons, gives the potatoes needed flavor, so don’t be shy.

Chopped/diced celery and green onion, or “other” veggies add a needed crunch to classic potato salads.

We use Miracle Whip rather than mayo for it’s slightly sweet flavor. And because that’s just what my family has always done, and prefers.  If you’re a mayo fan, by all means, make the move give the old Whip a try.

My mom’s original recipe calls for just three eggs, but I’m a super fan of eggs in potato salad so I add extra, like 3. We also love the eggs, similar to taste of egg salad. Feel free to adapt to your own taste.

Plain old yellow mustard is what we use.
Allowing the potato salad flavors to meld is important here. If I’m planning on eating the salad on the day I make it, I’ll prepare it at lunch so it can sit and build the flavors or even overnight and will stay good in the refrigerator for up to 3-4 days. If it doesn’t get eaten up before then.

Instructions
Bring potatoes to a boil in large pot of cold water that’s been liberally salted. Reduce the heat to medium high or a lightly rolling boil and cook for 10-15 minutes or until the potatoes are easily pierced with a pairing knife. Drain and let cool until just able to handle.
Peel the skins from the potatoes and cut into large diced pieces. Transfer the warm potatoes to a large mixing bowl. Allow the potatoes to cool, about 15 minutes. Add the celery and green onions. Chop 4 of the hard boiled eggs and add to the potato mixture.
In a medium bowl, mix the Miracle Whip or mayonnaise, yellow mustard, salt and pepper. I also add a good pinch of sugar. Mix well into the potato mixture and season with more salt and pepper if needed. Slice the last egg into thin slices and place the slices on top of the salad. Sprinkle with paprika if desired. Chill for at least 1 hour or overnight before serving. 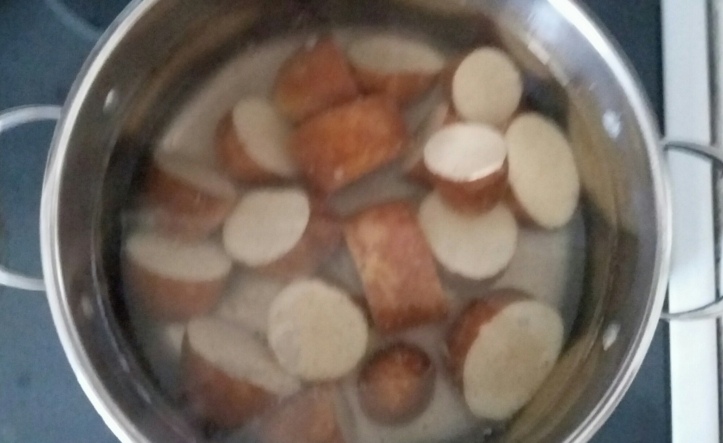 I did not add corn either hahaha.. but we are having fried chicken, potato salad & corn for dinner ♡

.let cool until easy to handle… 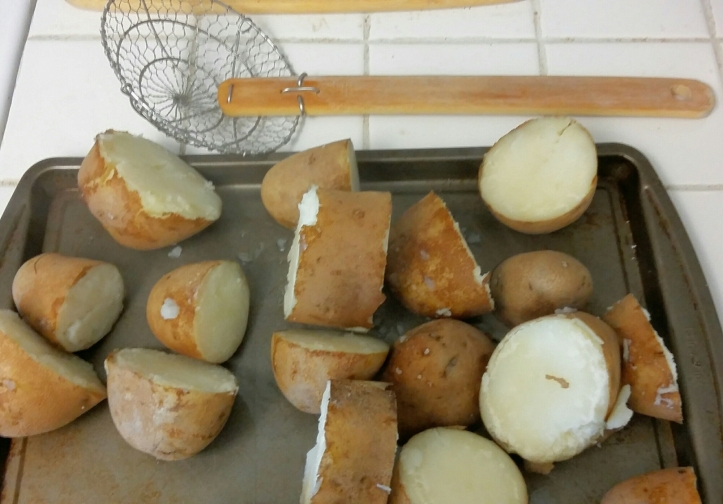 They should peel easily but a paring knife helps… 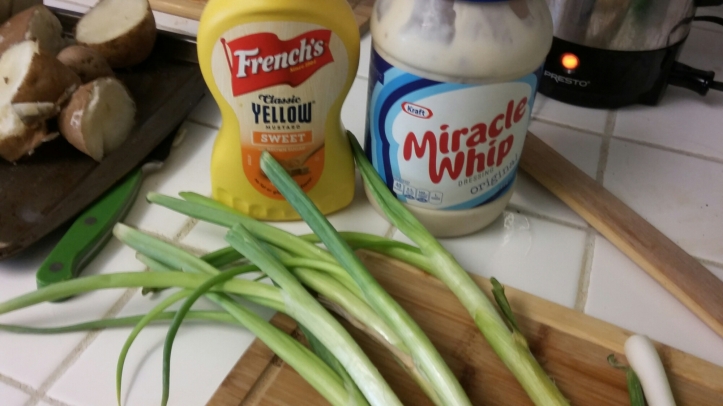 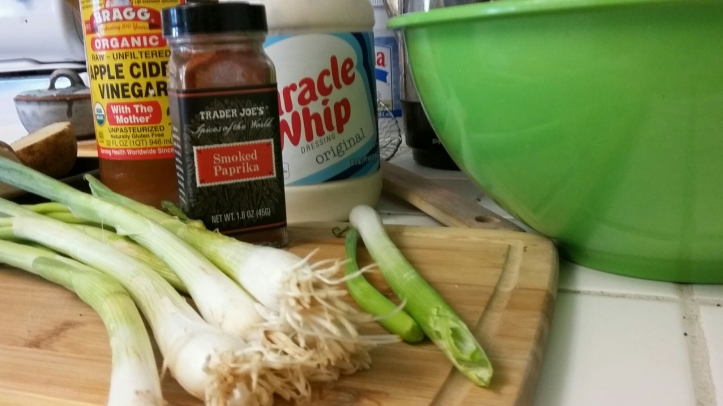 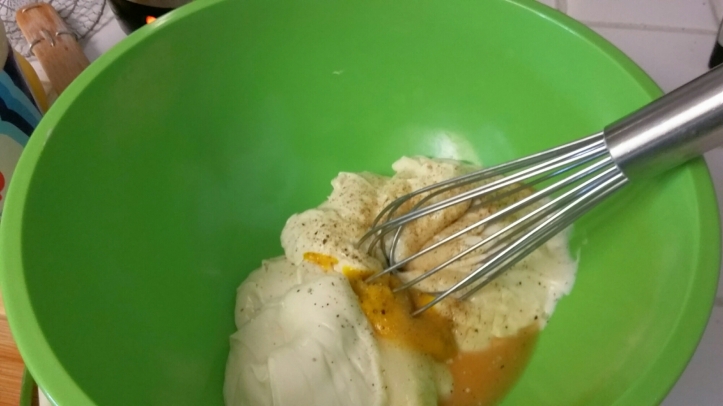 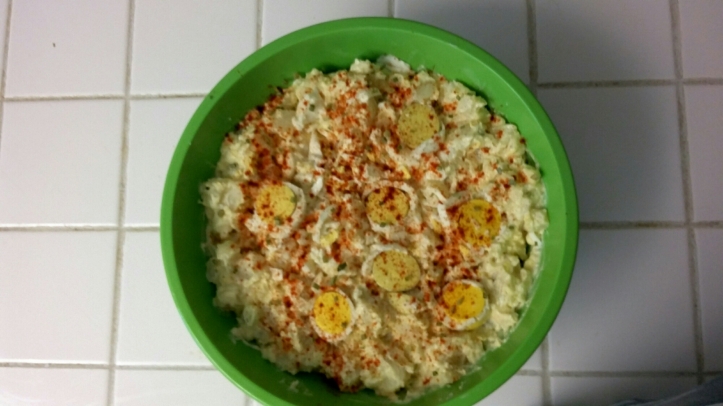 Speaking of my local Farmer’s Market…. 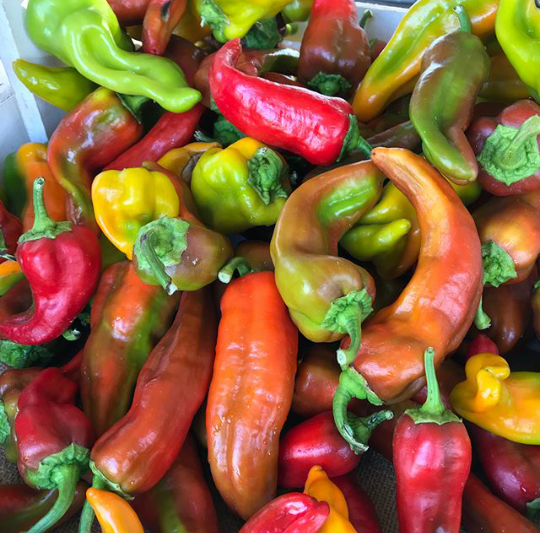 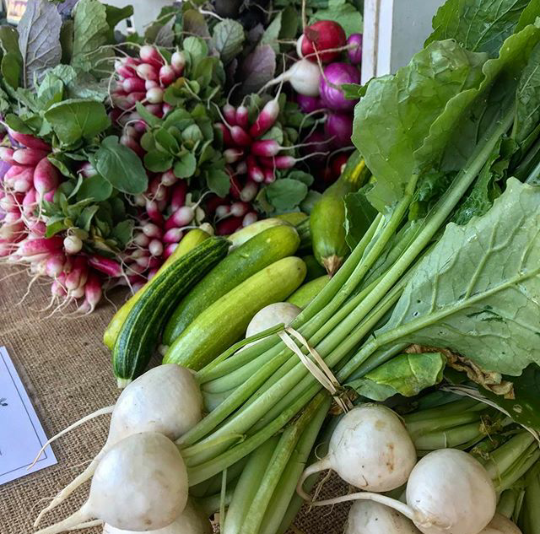 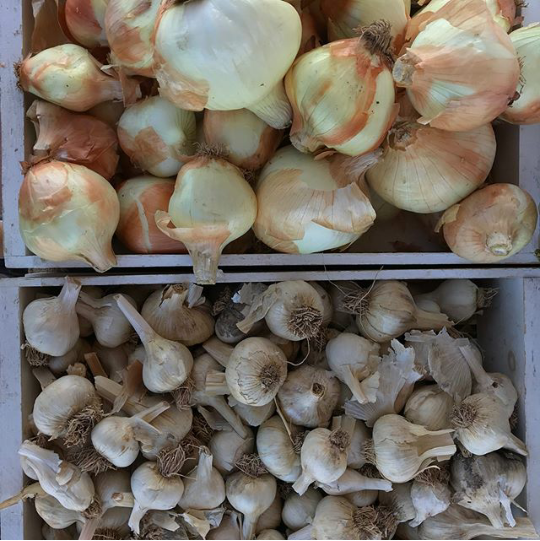 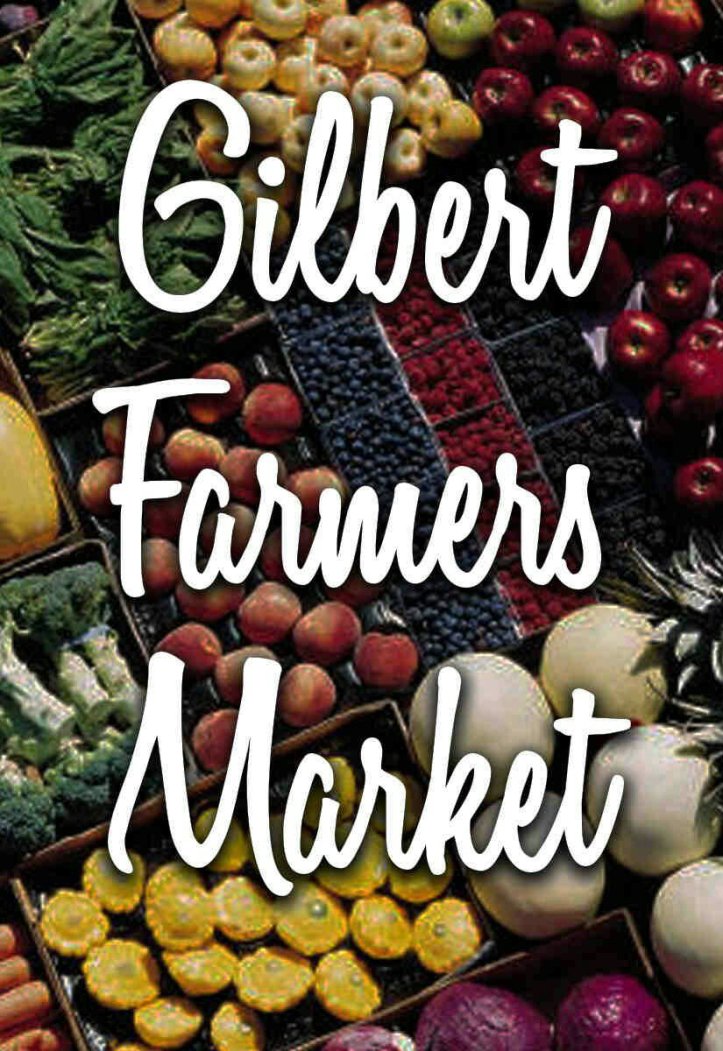 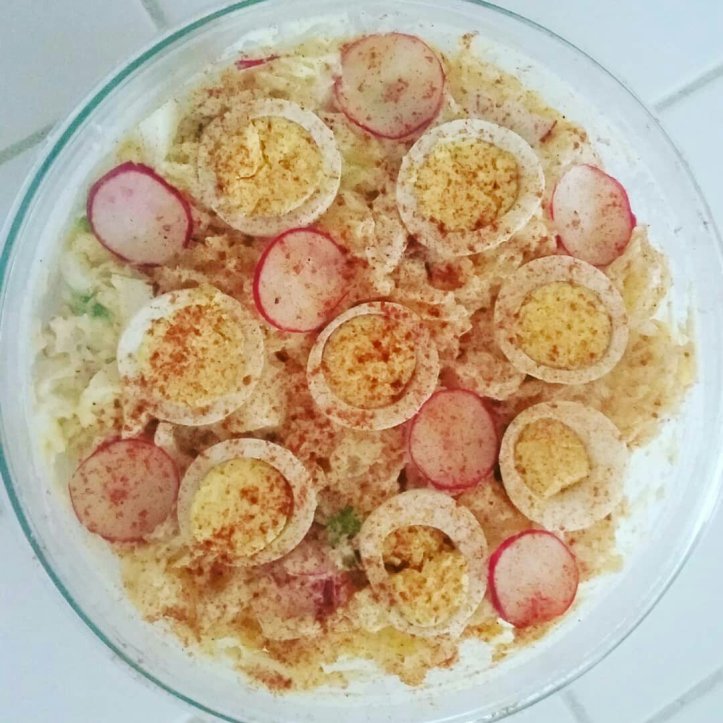 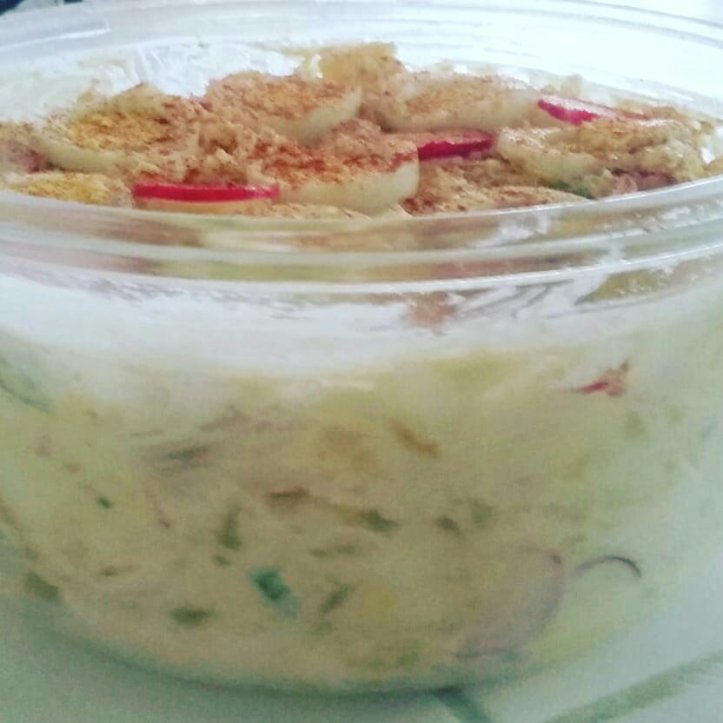